please describe me Why is women's health so important?

Deer client thanks for your questions.A women’s health does not refer only to her physical condition but to her total well-being. It is not determined solely by biological factors but also by effects of workload, nutrition and stress. Some may argue that a woman’s health is the most important in today’s society. As we know, the health of families and communities are tied to the health of women. The illness or death of a woman has serious and far-reaching consequences for the health of her children, family and even community. Today, women’s health is taking on a higher position in society and people are realizing that while women have many of the same diseases as men, their symptoms and treatments may not always be identical.Women's reproductive and sexual health has a distinct difference compared to men's health. Even in developed countries pregnancy and childbirth are associated with substantial risks to women with maternal mortality accounting for more than a quarter of a million deaths per year, with large gaps between the developing and developed countries. Comorbidity from other non reproductive disease such as cardiovascular disease contribute to both the mortality and morbidity of pregnancy, including preeclampsia. Sexually transmitted infections have serious consequences for women and infants, with mother-to-child transmission leading to outcomes such as stillbirths and neonatal deaths, and pelvic inflammatory disease leading to infertility. In addition infertility from many other causes, birth control, unplanned pregnancy, unconsensual sexual activity and the struggle for access to abortion create other burdens for women.While the rates of the leading causes of death, cardiovascular disease, cancer and lung disease, are similar in women and men, women have different experiences. Lung cancer has overtaken all other types of cancer as the leading cause of cancer death in women, followed by breast cancer, colorectal, ovarian, uterine and cervical cancers. While smoking is the major cause of lung cancer, amongst nonsmoking women the risk of developing cancer is three times greater than amongst nonsmoking men. Despite this, breast cancer remains the commonest cancer in women in developed countries, and is one of the more important chronic diseases of women, while cervical cancer remains one of the commonest cancers in developing countries, associated with human papilloma virus (HPV), an important sexually transmitted disease. HPV vaccine together with screening offers the promise of controlling these diseases. Other important health issues for women include cardiovascular disease, depression, dementia, osteoporosis and anemia. A major impediment to advancing women's health has been their underrepresentation in research studies, an inequity being addressed in the United States and other western nations by the establishment of centers of excellence in women's health research and large scale clinical trials such as the Women's Health Initiative.Thanks from Maya . 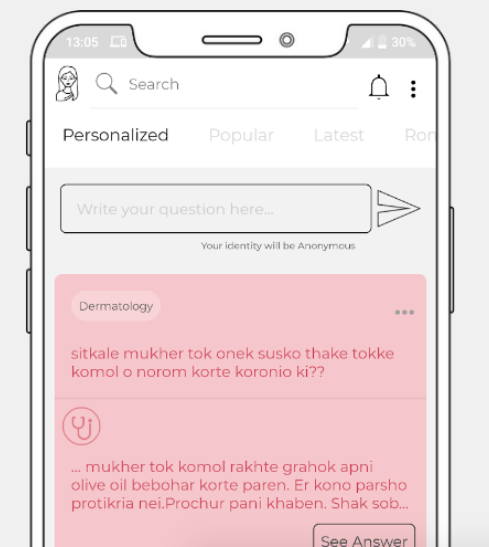